Living in France has opened my eyes to many things in terms of food – the most notable of which has been the versatility of rabbit. Growing up in England, the only rabbit that I had eaten was wild rabbit.  Wild rabbit tends to look like a red meat that has a lovely gamey taste.  In France the rabbit is different because they are reared for their meat much like chickens in the UK, subsequently their meat is white.

It is a dream of my parents to become self-sufficient (if any of you have ever read John Seymour’s book The Concise guide to Self-sufficiency – you will know that if you are successful the only thing you should ever need to buy is salt).  In terms of the production of fruit, vegetables, honey and meat my parents do pretty well.  I am not sure they will every go the whole hog and plant wheat/barley in order for us to have our own flour but the possibility is there should they wish.

One of their best producers is their rabbits.  We have three breeding rabbits, Hop, Skip and Jump who have a maximum of two broods during the winter and spring months.  In our experience the rabbits produce roughly 6-9 kittens (baby rabbits) each time, which means we get anywhere between, 24-36 rabbits each year for consumption.  This makes rabbit a very economical animal to rear, particularly when one rabbit can comfortably feed 5-6 people.

I am not going to pretend that the first time I was told that we were going to eat rabbit for supper I was a little sceptical.  This is because my first pet was a huge white rabbit, called Snowy (I know it was a very original name).  Once I got past the fact that I was not in fact eating Snowy but an animal that had been reared for eating and it not the type of animal you can pick up and cuddle, I was pleasantly surprised at how nice it tasted.   People often make a comparison between the taste of rabbit and chicken and it is probably the best way to describe the flavour.  The meat to all intents and purposes is fairly bland, but it absorbs flavour wonderfully which makes it very good to cook with.  I fully appreciate that rabbit is not for everyone, but I would definitely recommend everyone try it once.

Yesterday I had some friends around for supper.  When I asked them what meat they would like for supper they replied ‘rabbit’ because they don’t eat it that often and, when they do, it is wild.  I have had an idea about how I wanted to try cooking it for some time with apple, cider and mustard and this presented me with a perfect opportunity.  The meal does take quite a long time to make as initially you have to poach the rabbit very slowly in the oven.  However it is certainly worth the effort. 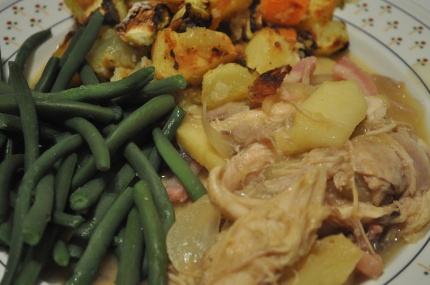 Rabbit in an apple, mustard and cider sauce 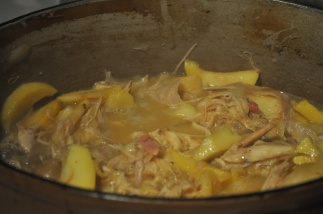 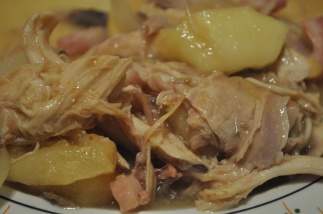