I have been mushroom hunting over the last couple of days as the weather has turned recently, producing “perfect” mushroom growing conditions – so I have been told.  This is the first year that I have turned my hand to this local sport as the land surrounding where we live is meant to be very rich for mushrooms.  In the spring I collected St George mushrooms (that were delicious in a rabbit pie) and Girolles which I used in an array of sauces.  However, I have only ever found three Cepes which are meant to be the most common mushroom in our area.  Earlier in the year I asked a local family who are members of the hunt whether they felt it was a good or bad year for mushrooms.  After much conferring they announced that it was a very poor year as they had only been able to find 20 kilos of Cepes in three hours!  This made me think that I am clearly doing something wrong, or I am not getting to the mushrooms before the other mushroom hunters.

So, now that the conditions are right I have decided to give mushroom hunting another try and recently I have come across several different types.  This has been great though the next problem has been that I have been unable to identify them bar one, a rather unattractive mushroom called ‘Langue de Boeuf’ (Beef Tongue).  A few days ago I went to the local pharmacy as they are supposed to be trained to identify mushrooms – however, unfortunately the man who would normally be able to help was away.

Today, one of our workmen with a great knowledge of all things to do with nature was on site, so I consulted him even though the mushrooms were a couple of days old.  He took a good look at them and said the following wise words, “as I do not know exactly what they are, you need to apply the number 1 rule of mushroom hunting, if you are even the slightest bit unsure what type they are NEVER eat them!”  He then regaled a story of one of his friends, who went mushroom collecting one day and came back with some mushrooms he thought he recognised, he ate some of them but as they didn’t taste particularly nice so he fed the rest to his dog.  That night the man was terribly ill, to such an extent he was admitted to hospital the following day but fortunately he recovered, the dog however sadly did not, and died.  Taking both this story and the number one rule of mushroom hunting into account I decided the best approach was to place the mushrooms in the bin.  (If anyone does have an idea what type of mushrooms these could be please do let me know.)

After my failed attempt at mushroom hunting I headed in the direction of our vegetable garden and decided to see if there was anything that was ready to be picked.  I found some baby turnips, Jerusalem artichokes, a diminutive pumpkin and a Praying Mantis.  I felt the best way to enjoy them (the vegetables not the Praying Mantis) was to put them into a chunky autumnal soup.  I decided to not to blend the soup because I wanted to keep the flavours separate as Jerusalem artichokes can overpower the other flavours when everything is all blending together. 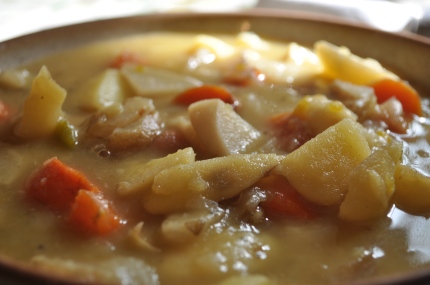 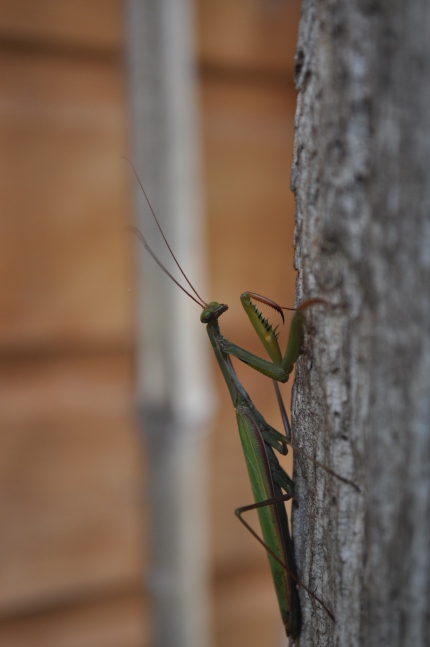 (One Praying Mantis that escaped the soup)