We got the call on Sunday, it was from one of our neighbours (JP) saying that they needed help eating their figs.  We gleefully got in the car and headed over.  Not knowing how many figs there would be we took only one small plastic basket.  On arrival JP welcomed us, but upon catching sight of our basket shook his head, turned round and headed in the direction of his garage, muttering as he went “tu apporté un seule panier?” (you brought only one basket?).  Unsure what to do we headed in the direction of the fig tree,  JP quickly caught us up carrying two wooden crates and it became clear why – the tree was absolutely laden with fruit.  Some of the figs were so ripe they disintegrated in your hand as you pulled them from the tree, which meant of course you had to eat them – a burden that of course I took on.  Within 10 minutes we had filled not only our (wholly inadequate) basket but the two wooden crates as well. 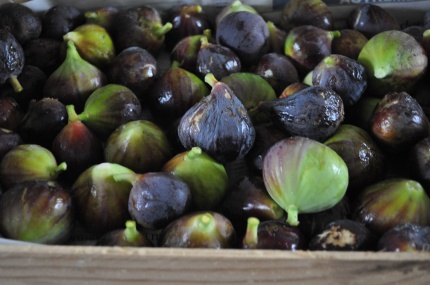 The only slight snag with figs, when they are “that” ripe, is that you have to use them incredibly quickly.  Unfortunately we didn’t have any sugar in the house on Sunday and the earliest we could buy some was on Monday afternoon, which meant we lost a fair few.  However, those that we were able to save/use have been incorporated in: a tart, a jam, a chutney, dried figs and several light meals.  The chutney was made with a “throw it in and see what happens approach” – the reason being was that I had some quinces and apples that needed using up and I wasn’t sure what spices would work well.  The end result was surprisingly good and we now have 7 jars stored away though I doubt I will ever be able to replicate the taste again as I didn’t measure anything.

What I found worked best with the figs was creating a simple starter with some cured ham (no cooking involved).  Here is the end result: