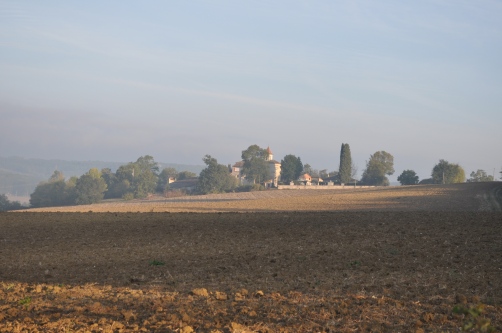 It was an early start yesterday morning to ensure all the animals were fed and watered before we headed off to a nearby hamlet at the top of a steep hill (jokingly referred to locally as the mountain).  We went armed with secateurs ready to help with the grape harvest.  On arrival we were given a ‘petit café’ to steady us for the morning ahead and then it was into the cars for the short drive down a dirt track to the vines.

It was a gloriously cool autumnal morning with a low level mist and as the sun came up it turned into a lovely warm day, perfect for grape picking.  I think there were about 20 of us in total involved in the grape harvest, we were handed large plastic crates to fill as we gradually made our way down the vines.  An aged tractor narrow enough to fit between the vines accompanied us as we slowly worked our way down collecting the filled crates that were then transferred into a small lorry.  It was a slow process, but everyone was in good spirits, nattering as they went catching up on local gossip.

Everyone stopped around 10.30 for another ‘petit café’ and slice of cake.  It was a well-deserved break, allowing everyone the opportunity to stretch their backs and get the feeling back in their legs.  Then it was the last big push before everybody stopped for lunch.  You can set your watch to a Frenchman’s lunch – as soon as the clock strikes 12 everyone downs tools and heads either home or to a local restaurant.  Yesterday, lunch was provided by those who lived on the mountain in return for our help.  A five course meal comprising of: soup, egg salad, pork and bean stew, cheese and last but by no means least poached pear with a chocolate sauce, had been beautifully prepared ready for the arrival of the workers.  Needless to say there was a healthy amount of homebrewed ratafia and vin de peche as well as wine laid out to ‘refresh’ everyone.  Lunch lasted a good 2 hours, giving us all enough time to gear ourselves up for the next stage of the harvest – the crushing of the grapes.

An old manual grape crusher was brought out, dusted off and placed on the top of a huge container (that could hold roughly 100 litres) that had been filled with a layer of fresh juniper branches to act as a primary sieve.   Over the course of an hour, crate upon crate of the grapes were passed through the crusher until 3 containers were filled to the brim.  Then the juice of the grapes (known locally as ‘mout’ – meaning the juice from the first pressing of the grape) was drained off and taken away to be made into a regional drink – Ratafia. 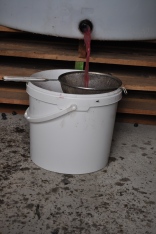 We were lucky enough to be given some of the mout so that we could make some Ratafia ourselves.  It is a very simple drink to make requiring only two ingredients, eau de vie and mout.  Yesterday I watched and listened as a great debate arose about what is the perfect mix as it would seem that everyone has their own theory about this.  All I could deduced was too little eau de vie and you run the risk that the Ratafia ferments and becomes undrinkable, too much eau de vie the drink is too alcoholic and is like drinking paint stripper.  What I concluded as we drove home is that making Ratafia is more of an art than a science.  So with that in mind, the Old Man got out his 25l demijohn  and measured out what he felt was best and I guess we will find out the end result when we get to try it in mid-December.