When I got back to France last week lying in a box on the kitchen table were four relatively large marrows.  My first reaction was, “oh God, not marrow”, as the childhood memories of stuffed marrow came flooding back.    I have always thought of marrow as being a fairly tasteless vegetable which always seemed to turn into a soggy mess when cooked.  However, this time I was determined to find something good to do with them.  So my first step was to Google marrow recipes.  Sure enough stuffed marrow appeared time and time again.  I stumbled on one forum that had me chuckling away as I read some peoples’ views on marrows.  Here are a couple of the comments for your amusement:

“Slice marrow in half lengthways.  Leave on kitchen worktop.  Wait for Other Half or child to come in and moan “oh not bl**dy marrow AGAIN” *theatrical sighing*.  Take marrow outside and give to the hens”

After A LOT of searching on the internet some of the more interesting recipes I started to come across involved frying the marrow with fresh herbs – however I was concerned that the marrow might become a little greasy.  However, it made me start thinking about what it was about marrow that I didn’t enjoy and it boiled down to the texture.  Subsequently it got me thinking what if I tried to make the outside crispy.  In the end I settled on marrow and potato chips with fresh herbs – and even if I do say so myself, they tasted pretty good. 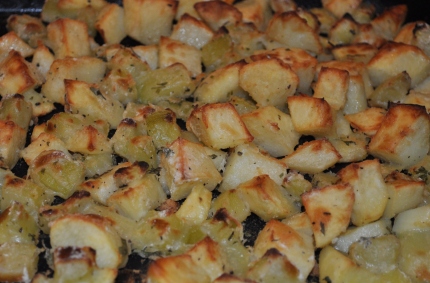 Note: Yesterday I made the potato and marrow chips again, this time however I added cubed carrots for a splash of colour.  I made the mistake putting them in the oven at the same time as the potatoes, as a result they cooked too quickly.  So a word of advice add the carrots at the same time as the marrow otherwise they are likely to be a little on the carbonised side of things… 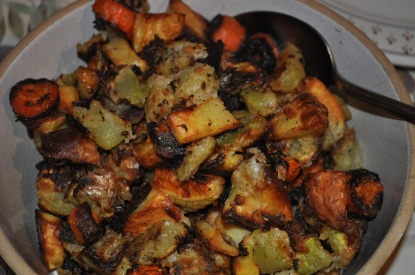