Earlier this summer my brothers and I were talking about what we could do with the eau de vie stocks that we have at home.  Eau de vie is an acquired taste – I personally don’t mind the apricot variety that we have a bottle of, but I am not the biggest fan of plum of which we have literally litres upon litres in the barn.  As a result, my brothers and I have been thinking of ways to mask the raw taste of the plum by adding a variety of other fruits and herbs.

My eldest brother introduced me a couple of years ago to the delights of Sloe Gin when we were out on a shoot.  A sip of the drink was given to everyone to warm them up on a bitterly cold and wet winter’s day.  The sloe gin had a syrupy consistency which warmed your throat as you drank it and ever since I had it I have wanted to try and make it though I have struggled to come to terms of wasting perfectly good gin if it didn’t work out.  A solution presented itself this summer – substitute the gin with eau de vie and if it doesn’t work out it I won’t feel as though I am wasting anything other than some sugar, given that the sloes are free and we have so much eau de vie we just don’t know what to do with it.

Some other ‘infusions’ that are being tried out by my brothers and I include: Raspberry de Vie which my younger brother is giving a go in a 1.5 litre water bottle in London(doubtless to be shared amongst his friends at a house party later this year regardless as to whether it tastes nice or not); Damson de Vie which my eldest brother is trying out this time in a fancy 5 litre glass demijohn; and lastly Rosemary de Vie (as this is going to be used for cooking with in stews during the winter months I have not added any sugar). 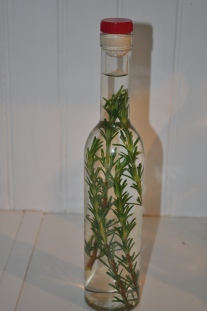 After a lot of research on the internet looking at recipes for Sloe Gin I decided that perhaps precision was not the best approach for Sloe de Vie. Subsequently, I settled on the idea of a bit of guess work and using rough estimation for the ingredients, concluding that I can always add more sugar in 2 months’ time when I try it for the first time.  I made 4 bottles in total, three 75cl bottles for the boys and one  1 litre bottle for me, all using the same principles.  After 14 days of maturing my Sloe de Vie looks like this: 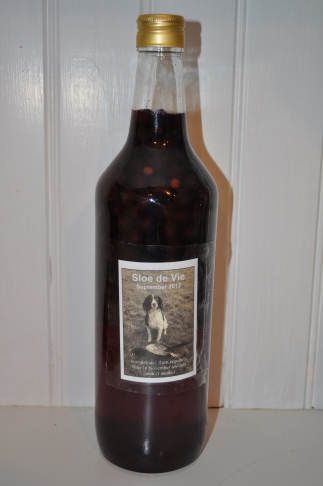 Note: I have added juniper berries on the basis that they should add a slight gin flavour to the mix – however this could turn out to be a rookie error.  As I mentioned before, this drink is usually made using gin. Therefore, if you prefer to try that instead simply don’t add the juniper berries (the same goes for vodka).