This time last week I was in a small church in Dorset watching one of my good friends getting married.  It was a fantastic day, the bride looked beautiful, the weather held and everyone was in great spirits.  Today I am sitting on the sofa watching the pouring rain outside whilst listening to the 20/20 world cup cricket (England are playing New Zealand and at the moment it is decidedly average – however fingers crossed we’ll win).

We’ve got friends coming around later this afternoon and Mumsy asked me yesterday if I could bake a cake.  So, last night I settled on a coffee and walnut cake which I prepared and baked in 25 minutes flat (almost a PB).  I love cakes and the way that they are so satisfying when they work, plus the fact they can be so effortless to make if you have the ingredients available.  The reason I made the sponge last night is because I am often very impatient waiting for a cake to cool before icing it (often because I want to eat it straight away) and subsequently more often than not the icing melts on the inside leaving the cake tasting good but looking an utter mess.  So when I came to ice the cake this morning I was completely confident melting icing would not be an issue – what I did not take into account was that I would have a minor altercation with our electric beaters half way through making the icing.  The beaters slipped out of my hand whilst still on the highest speed straight onto the counter spraying coffee butter icing everywhere.  Using my forearm as a shield I managed to pin the beaters to the counter and turning them off – however at some point I managed to snap one of the heads of the beaters off – Ooops.   The beaters are now in the bin and need to be replaced, however I am sure you’ll be relieved to hear only a little of the icing was lost so a major icing drama was averted.  I blame the beaters entirely for what happened and not the fact that my fingers were a little bit greasy from having tasted the icing.

The end result of all that drama was this… 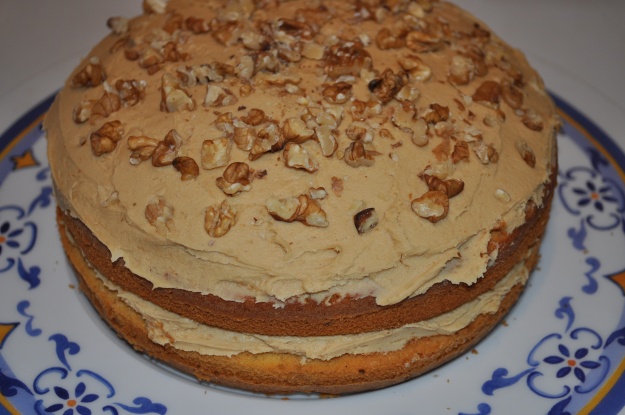 I have made this cake more times than I can think of, below is a picture of the coffee and walnut cake I made for my Grandmother’s 90th Birthday using 1 ½ times the sponge recipe and 2 times the icing recipe.  For this cake I used unsalted butter for the icing which made it a lot sweeter.  However, my preference is to use lightly salted butter to cut the sweetness. 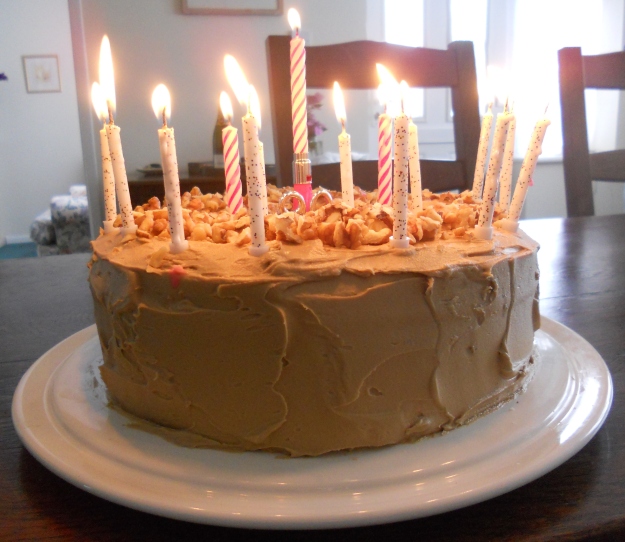 4 thoughts on “Coffee and walnut cake”