It is so hot outside – the heat-wave is well and truly here!  Right now I think it is about 41C outside, subsequently, having a BBQ for lunch was really the only option.   All the family are here this week, which means big quantities of food are needed.  Having raided the deep-freeze last night for various types of meat, this morning all I had to do was make some marinades.  Deciding what marinade for the chicken would be was a no-brainer – honey and mustard is a classic marinade we have used on chicken legs for years, because the honey caramelises so nicely on a BBQ.  The more important question was what to marinade the spare ribs in?  I woke up this morning thinking some sort of Chinese plum sauce might be nice, but unfortunately we didn’t have any already made up, so I decided to try and make it.  The result was a sticky plum sauce that worked really nicely.   To balance out the vast quantity of meat I decided that vegetable skewers might not be a bad idea.  Aside from the plum sauce that took about an hour to make (but now that’s done I have 7 big jars of the stuff ready for use later in the year) the rest of the preparation for the BBQ took no time at all.

I am pleased to say that there was hardly any scraps left over from the BBQ other than a few bits of salad, so all in all a job well done by all members of the family.

Chicken in Honey and Mustard 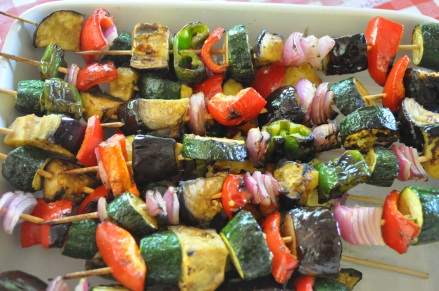